My son wants to start putting titles on the Minecraft screencasts he makes. I had tried to use OpenShot to edit his screencasts a few months ago, but the quality degraded so much as to be useless.

I took some time this weekend to dig into the issue. Here's what I learned. But first, here's the tools I'm using.

Directly uploading the output of RecordMyDesktop to YouTube produces acceptable videos, so I was reasonably confident that RecordMyDesktop wasn't the problem. I suspected that the process of importing the screencast to OpenShot and then exporting it again was converting formats one or more times along with way, with the attendant loss of quality. So my first task was to figure out the input format.

With a bit of Googling, I found the command line tool that I needed: avprobe. Install the right package:

Then get the file information:

The output I got was: 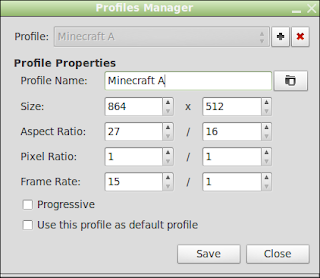 The output of avprobe didn't map exactly to what Openshot was looking for, so I had to guess a bit at what to fill in. I suspected that "PAR" from avprobe was the "Pixel Ratio" and that "DAR" was the "Aspect Ratio". The frame rate was "15 fps" (frames per second). The size was given by "864x512" in the avprobe output.

If you're doing your own video, note that the size is going to depend on the size of your Minecraft window when you captured the raw screencast, and also on whether you chose to capture the window border or not. And the aspect ratio will also change based on the size.

Next I created a new project selecting the profile I just created in the "Project Profile" field. Then I added clips and edited the video. Finally, I was ready to export.

I selected File-> Export Video... and went straight to the "Advanced" tab. Then I changed the "Profile", "Video Settings", and "Audio Settings" to look like this: 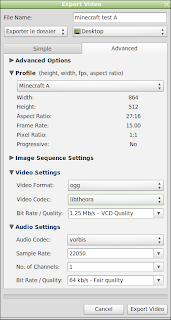 Then I clicked "Export Video", and I had a video that would upload with acceptable quality to YouTube.

Email ThisBlogThis!Share to TwitterShare to FacebookShare to Pinterest
Labels: video

I wrote here about the work-flow for planning and executing the move of a group of one or more servers from one data centre to another. Here's the picture:

Email ThisBlogThis!Share to TwitterShare to FacebookShare to Pinterest
Labels: Relocation

Work-flow for a Data Centre Relocation

I've relocated a couple of data centres, and I've just started working on another. The last one moved over 600 servers, about half physical and half virtual. We moved over five months, counting from when the first production workload went live in the new data centre. Our team consisted of five PMs working directly with the server, network and storage admins, and application support teams.

[Update: Check out the visual representation of this post here.]

We knew we had a lot of work to do in a short time, and we were working in a diverse and dynamic environment that was changing as we tried to move it. We needed a flexible and efficient way to move the data centre. One thing that really helped was a work-flow for the PMs to work with the various technical and user teams that allowed teams to focus on doing what they needed to do.

Early in the project we collected all the inventory information we could to build up a list of all the servers, whether they were physical or virtual, make and model, O/S, etc., and put it in the Master Device List (MDL). We then did a high-level breakdown into work packets or affinity groups in consultation with the application support folks. These works packets were what was doled out to the individual PMs.

Each PM then began the detailed planning process for the work packet. Starting from a template, the PM began building the relocation plan, which was simply a spreadsheet with a few tabs:
At this point many PMs also nailed down a tentative relocation date and time for the work packet and put it in the relocation calendar, a shared calendar in Exchange. The relocation calendar was the official source of truth for the timing of relocations. Some PMs preferred to wait until they had more information. My personal preference is to nail down the date early, as you have more choice about when to move.

The PM then got the various admins to gather or confirm the key information for the server build sheet and the server IP list.

The server build sheet contained all the information needed to build the new server in the new data centre. For a virtual machine, this was basically the number and size of mounted storage volumes including the server image itself. This information was key for planning the timing of the relocation, and in the case of VMs with extra attached storage volumes, made sure that everything got moved.

For physical servers the build sheet had everything needed for a VM, plus all the typical physical server information needed by the Facilities team to assign an available rack location and to rack and connect the server in the new data centre.

The PM iterated through these documents with the admins and support staff until they were ready. One thing that often changed over the course of planning was the list of servers included in the work packet. Detailed analysis often discovered dependencies that brought more servers into the work packet. Or the volume of work proved to be too much to do in the available maintenance window and the work packet had to be split into two. Or the move method turned out to be inappropriate. We encouraged this, as our goal of minimizing or eliminating downtime and risk was paramount.

When the plan was done the Facilities team took the server build sheet and arranged for the physical move and connection of servers. The Network team took the server IP list and used it to assign the new IPs, and prepare the required network configuration and firewall rules.

The network admins put the new IPs into the same server IP list sheet, which was available to everyone, so for example the server admins could assign the new IPs at the time of the relocation.

At the time of the relocation, everyone did their tasks according to the relocation plan, and the PM coordinated everything. For simple single server, single application relocations, the team typically moved and tested the server without intervention from the PM.

It wasn't all roses. We had a few challenges.

We set a deadline for the PMs to have the server build sheets and server IP lists completed two weeks before the relocation, to give time for the Facilities team to plan transport and workloads for the server room staff, and for the Network team to check all the firewall rules and ensure that the new configuration files were right. We often missed that deadline, and were saved by great people in the Facilities and Network teams, but not without a lot of stress to them.

There was some duplication of information across the documents, and it could be tedious to update. As an old programmer, I had to stop myself several times from running off and building a little application in Ruby on Rails to manage the process. But we were a relocation project, not a software development project, so we sucked it up and just worked with the tools we had.

In summary, we had a repeatable, efficient work-flow that still allowed us to accommodate the unique aspects of each system we were moving. We needed five key documents:
The PMs were working with various teams that knew how to do, and were very efficient at, certain repeatable tasks: